A couple of times each year I preach at my church. This time I look at Paul’s 3rd Missionary Journey in Acts, focusing on how teaching and learning enabled the disciples to spread the good news of Jesus to the ends of the earth.

My overview of Acts is based on The Bible Project’s summary videos that take you through this slide:

This book is the sequel to the Gospel of Luke and probably should be called, The Acts of Jesus & the Spirit—as they appear throughout the narrative.

In chapter 1, Jesus says to His disciples, “You’ll be my witnesses in Jerusalem, Judea & Samaria, and to the ends of the earth.” And this is basically how the book of Acts unfolds. 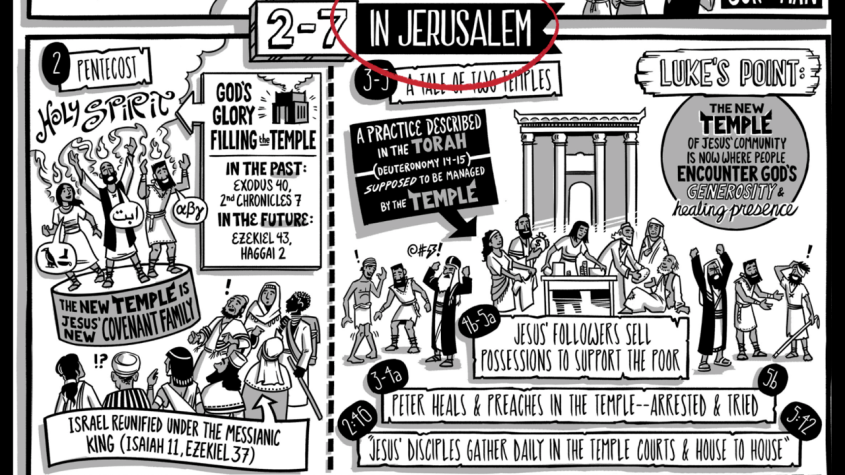 Chapters 2-7 shows this being fulfilled in Jerusalem. 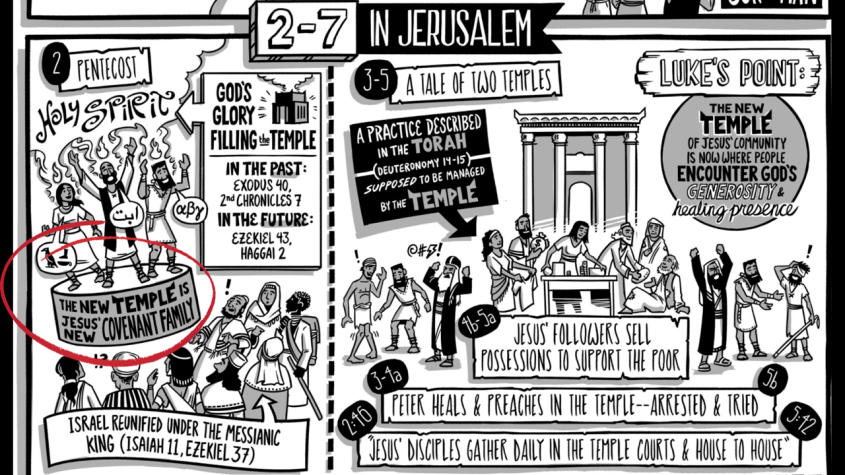 The disciples receive the Holy Spirit and become the New Temple

—the place where people could encounter God’s generosity and healing presence.

Sadly the establishment didn’t like this and so started killing them and driving them out of the city. However, this didn’t stop God’s plans. Indeed it allowed the Gospel to go into Judea & Samaria, and beyond. 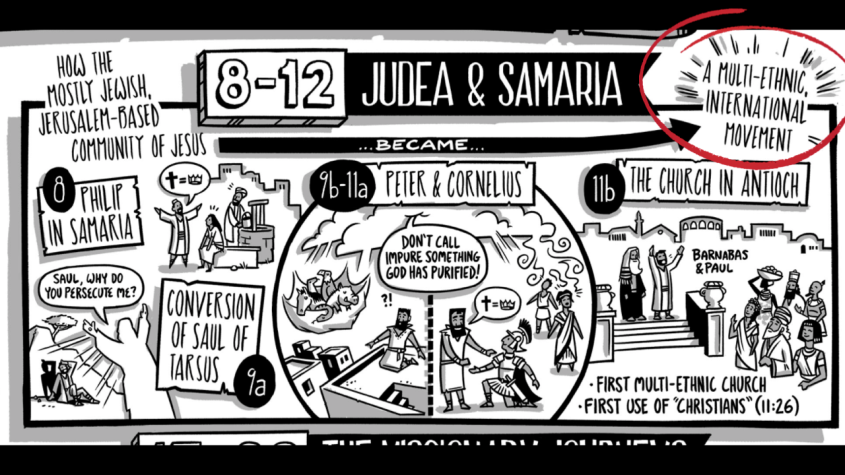 Along the way, we have Jesus appearing on the road to Damascus and miraculously converting Paul from being the greatest opponent of Christianity to its greatest advocate. 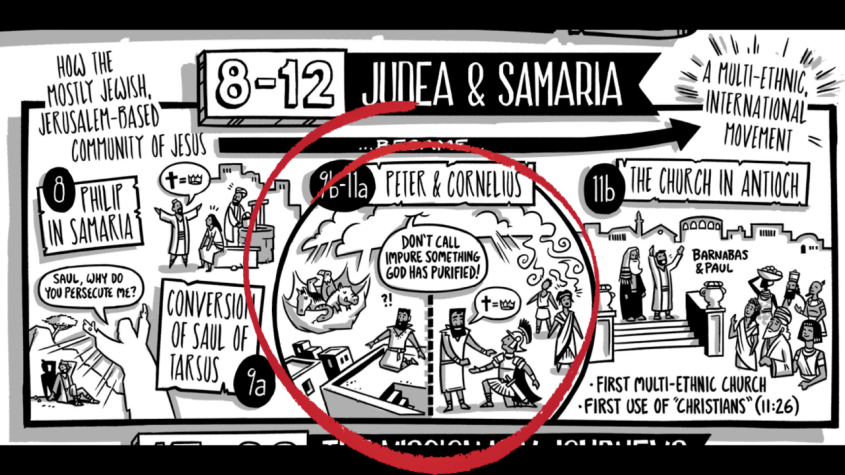 We then have God giving Peter a vision showing him that no food is unclean, this is paralleled with the Holy Spirit coming to the nations showing that no person is unclean—that even non-Jewish people like you and I, can become Christians.

And we have God establishing the church in Antioch—the launching point for Paul’s three missionary journeys. 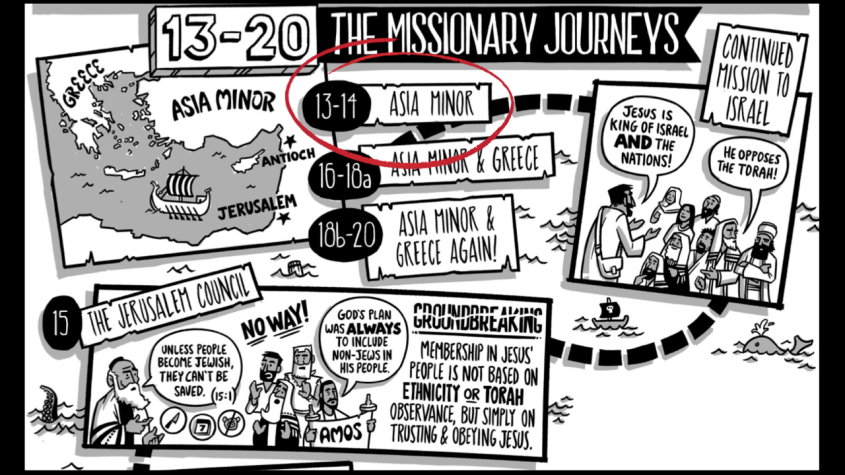 There’s a brief pause, for the groundbreaking Jerusalem Council, that clarified that being part of Jesus’ community isn’t based on ethnicity or obeying the OT Law but simply on trusting and following Jesus.

Paul then goes on a second missionary journey, this time to Asia Minor and Greece.

And finally a third missionary journey, again to Asia Minor and Greece. It’s this third journey that I’ll be focusing on today.

Hopefully you recognise most of the places on this map—around the Mediterranean we have Europe, north Africa, and the Middle East. The orange dots in the middle are the places Paul visited on his third missionary journey. Zooming in…

Paul started at Antioch (near modern day Aleppo, which we’ve been hearing about in the news). He then travels to Tarsus, Iconium, and Ephesus. He stays there for around three years before a full-on riot occurs and he needs to escape north, to Macedonia. He then travels down through Greece—probably stopping at Athens and visiting early Christian communities we might recognise, such as the Philippians, the Thessalonians, and the Corinthians. Paul then starts to head back, visiting Troas and Miletus (where he catches up with the Ephesian church elders), before he sails across the Mediterranean to Tyre. He finishes up in Jerusalem.

So that’s when and where the journey took place historically. But you may be asking, as I was when I was preparing this talk, how on earth is this journey relevant to me today?? So I sat down and made a list of themes in the 3 chapters…

These are important themes and I’d encourage you to read through the chapters and think about them but I’m actually not going to talk about any of them because another theme really stuck out: learning and teaching about Jesus accurately is important. So I’ll look at examples of that and how they responded to opposition it generated, then I’ll look at what was taught about Jesus, and how can we learn about Jesus today.

So, the theme of learning & teaching about Jesus accurately appears throughout the journey but I’ll just look at 3 examples of good teaching and 3 examples of bad teaching. The first example is of Apollos, Priscilla and Aquila in Ephesus.

There’s quite a few things we can learn here. First, even if we’re talented and educated, we must always be willing to listen and learn more. This allows us to cooperate, which benefits us and those around us. In this passage we see it allowed Priscilla and Aquila to privately and gently teach Apollos one-on-one. However, it also shows that there’s a time and place for Christians to debate publicly. God willing, there will be a great example of that next month when Samuel Green does a public debate with an Islamic scholar.

The next example of the importance of teaching and learning is Paul in Ephesus.

The last example of how enthusiastic they were about teaching, is Paul in Troas. (Admittedly not every teacher is like Paul but I think it should cause us to pause before we complain about sermons going for more than 10 minutes). These examples also show how teaching and encouragement are closely tied together. And as I learnt last night watching The Bible Project’s Word Study: Shema – “Listen”, when we truly listen and learn, we will put what we learn into action.

The first is of a group of Jewish exorcists who obviously didn’t properly comprehend the significance of Jesus but nonetheless were trying to invoke his name for their business. Unfortunately for the group, the demons weren’t fooled and they were humiliated. Not only does it show the danger of ignorance, I think there’s a lesson here about not treating Jesus as a genie to do our bidding. That instead, we should be respecting Him as both a person and our King—that our priority should be doing His will.

Our 2nd example of bad teaching is linked to the first.

There are some falsehoods, such as sorcery, that shouldn’t be taught.

The last example is where Paul warns the Ephesians about false teachers.

We need to test teaching, especially when there’s any money or self-promotion involved.

So when we go around teaching people about Jesus, encouraging believers, and generally promoting Jesus, sometimes we will be opposed, particularly if someone feels their power or wealth is being threatened. We see an example of this in Acts 19: 23-41.

Demetrius the silversmith and his mates were making lots of money making idols but Paul had persuaded many people that handmade gods aren’t really gods at all so they incited a riot and dragged Paul’s travelling companions into the amphitheater.

As an aside, I’ve been reading through the OT and last night I read Habakkuk and noticed this interesting link: idols can’t teach us, whereas God has been teaching humanity from the very beginning, especially through Jesus who was a Rabbi (a Jewish teacher), and the Holy Spirit is also described as a teacher.

Anyway, back to the riot. I came across a fascinating study a few months back:

Because the Christian movement was non-violent, it was really hard to pin anything on them, and that helped it spread much further than the many futile armed rebellions. Throughout Church history, and continuing today, the non-violent approach has assisted Christian communities to grow despite persecution. So both morally and pragmatically, if someone opposes you, I recommend a non-violent response.

Now, a significant part of the way the early church taught and learnt was through literature. They read the OT scrolls and the letters that the Apostles wrote. They also reproduced and shared them so the message could go viral. Coincidently, The Bible Project podcast discussed the book, Destroyer of the gods.

Their passion for literature allowed them to witness much further than any individual could physically travel—to the ends of the earth—all the way to us today!

So far the entire Bible has been translated into 648 languages, the NT into another 1432 languages, and portions of it into another 1145 languages—all up, it’s about 5 times more translations than any other book ever. If we keep up the momentum, every language on the planet will have some Scripture by 2033! The other exciting thing is that the advent of the Internet and smartphones means even more people can get access to the Bible in their language.

Paul’s teaching about Jesus can be summed up as follows: 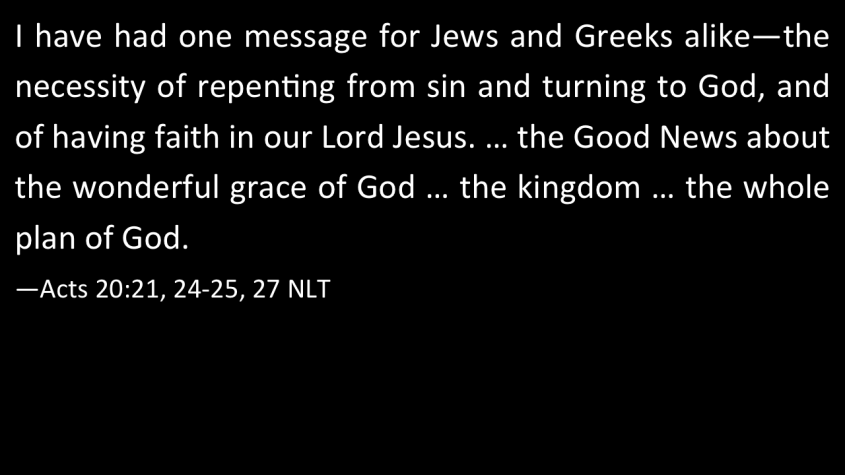 I realise we’re all at different ages and stages of life, so what “valuing teaching and learning” looks like will vary. However, most of us have access to either a computer, tablet, or smartphone so we can easily check out:

They’re a non-profit organisation that produces high quality, short, free animated videos of the books of the Bible as well as the themes within it. Follow them on:

I’ve watched almost every video they’ve done and listened to their podcasts for hours. It’s been really helpful for understanding the Bible better. I can’t recommend it enough!