All Christians are universalists about creation—God created all things, through his Word. And creation is not simply about origins (everything comes from God), but about purpose and destiny. Created things have an end, a destiny, and that end, as the beginning, is God. The end of creation is there in its beginning: creation is from God, for God, and oriented towards God, reaching towards its potential and completion in God. So the question of universalism and hell can be framed in terms of whether or not God will bring all creation to the goal for which he intended it. Yes . . . or no?

Let’s get more specific. Take humans—the subject of this debate. Christians agree that all humans are created in the image of God (Gen 1:24–26). But while God did create humans as “good,” he did not create humans as finished and completed creatures—he created them with a destiny to grow towards. This telos of human creatures is, in community, to be filled with God and to image God in the world.

Furthermore, humans find their sense of fulfillment and happiness in God. We all long for happiness; as Jerry Walls puts it, “We have a built-in hard drive to desire happiness . . . .”1 That is how God made us. And this desire cannot be fulfilled without being rightly related to God. Augustine famously put it this way: “our hearts are restless until they find rest in you” (Confessions I). So our story of creation already includes a notion of the goal for which God destines humans—and that goal is not everlasting alienation from God.

The gospel revelation of Jesus Christ deepens and sharpens our understanding of the human telos. The risen and ascended humanity of Christ is the climax of our human nature. One day we shall be like him (Rom. 8:11; 1 Cor. 15:12–57; 1 John 3:2). For us, being human is a yet-to-be completed journey. Jesus is the only person ever of whom it can be said that he is fully human. Humanity has reached its goal in him. And in the gospel, it becomes clearer to us that the creation of humanity was always a two-phase project: the first Adam was earthly; the second Adam was heavenly (1 Cor. 15:42–49). Humanity was made with a destiny, and that destiny was to be conformed to the image of the true human, the origin of the new, phase-two humanity—Jesus. This theology is foundational for universalism. Humans have been created to grow towards God, their destination. They are not created for hell, but for theosis. 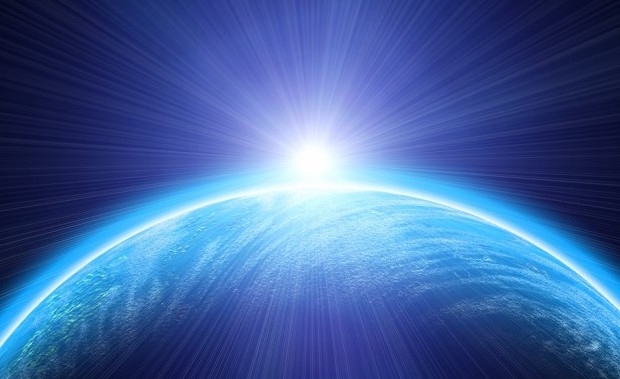 Genesis suggests that the move from phase-one to phase-two humanity was interrupted by sin. Sin is the creature’s attempt to interrupt the reditus, the return to God, which is the goal of creation. As such, sin represents a rupture in creation. It corrodes human be-ing at every level and makes it impossible for us to reach our destination. Instead we spiral away from God, the source of life, into corruption, decay, and death.

All Christians are universalists about sin—all have sinned and have fallen short of the glory of God (Rom. 3:23). Without divine redemptive grace human beings (and creation as a whole) are doomed to futility.

To hate creatures made in his image, even fallen ones, would be a form of indirect self-hatred, and this God cannot do. Thus, Jürgen Moltmann: “God is angered by human sin not although he loves human beings but because he loves them. He says No to sin because he says Yes to the sinner.”3

Every one of us is in the image of God, and every one of us is like a damaged icon. But if we were given an icon damaged by time, damaged by circumstances, or desecrated by human hatred, we would treat it with reverence, with tenderness, with broken-heartedness. We would not pay attention primarily to the fact that it is damaged, but to the tragedy of its being damaged. We would concentrate on what is left of its beauty, and not on what is lost of its beauty. . . . We must learn to look, and look until we have seen the underlying beauty. . . . Only then can we even begin to do something to call out all the beauty that is there.4

Blogger Alvin Rapier, commenting on this quote and annihilationism, writes:

If humans are like damaged icons and annihilationists hold that God completely annihilates human beings through the fires of hell, then the doctrine of annihilationism makes God the Great Iconoclast, the destroyer of human icons. God would be destroying the very Creation meant for communion, repeating the actions of the iconoclasts that were condemned in the Seventh Ecumenical Council. Instead of treating these icons “with tenderness, with broken-heartedness” and calling out the beauty that is there, as Bloom stated, annihilationism holds that God inflicts “capital punishment” upon these images, that the fires of hell will consume them, similar to how the iconoclast extremists “tore down icons from their places in churches and broke them up and burnt them” (Stephen W. Need, Truly Divine and Truly Human, 132). The God of annihilationism is the God of the iconoclasts, the ultimate destroyer of God’s images.5

So building a doctrine of eternal hell on the doctrine of the fall may prove harder than we may at first think. Hell’s defenders should try to do so, but they will have to wrestle with the wider biblical metanarrative in which the fall is located. Will God allow sin to thwart his creational purposes to beautify the cosmos? The answer comes, as we’ll see, in the gospel story. Sin may be as deep and dark and deadly as it can, but Christ annihilates it! The first Adam may have wrought havoc, but the Second Adam more than undoes that destruction (Rom. 5:14–21). Where sin abounds, grace abounds all the more (Rom. 5:20). One problem with hell is that it makes the victory of Christ over sin sound something of a damp squib. Sin wreaks havoc in creation, but praise be! Grace undoes a bit of what sin does! Where sin abounds, grace abounds quite a lot. Is that divine victory over sin? It looks at first blush like a doctrine of hell is a doctrine in which Satan achieves a big chunk of what he set out to do. And if the Augustinian tradition is correct and most people are forever damned then eschatological victory is in danger of sounding like celebrating the divine triumph after hearing the following soccer score:

“Hooray! God has won!” For Augustine, this score counts as a win because God wanted Satan to score 5 and only wanted one goal himself, and because he plans on beating up Satan after the match. Yet that still sounds like another way of saying that God wanted to lose.

1. Jerry L. Walls, Heaven, Hell, and Purgatory: A Protestant View of the Cosmic Drama (Grand Rapids: Brazos, 2015), ?.
2. John Kronen and Eric Reitan, God’s Final Victory: A Comparative Philosophical Case for Universalism (New York: Bloomsbury, 2011), 38. Some readers will be uncomfortable associating the divine image with rationality. If that is you, simply substitute “human” for “rational” in the passage.
3. Jürgen Moltmann, The Coming of God: Christian Eschatology (London: SCM, 1996), 243.
4. As quoted in http://www.stmaryorthodoxchurch.org/orthodoxy/articles/quotes
5. Alvin Rapier, “God the Great Iconoclast? A Theological Critique of Annihilationism.” Blog post (16 Dec 2014) on www.thepoorinspirit.com.

Above is the third section of the excellent talk Robin Parry gave at the 2015 Rethinking Hell Conference (video below). See here for more.

My last post introduced what I think are the most common views that Christians have on Hell (broadly defined as the fate of those who aren’t saved in this life). This week I’m going to look at one of the reasons why I think Hell needs to be reformed, and that is because current notions of Hell don’t seem to fit well in the Bible’s overall story or metanarrative.

There are a lot of themes that could be included but I’ll walk us through a simple summary of the Bible that focuses on the relationship between God and people: 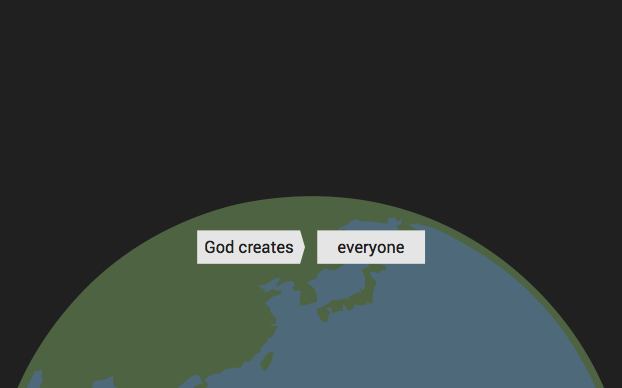 We start with the perfect, eternal God who creates everyone.

For everything was created by Him,
in heaven and on earth,
the visible and the invisible,
whether thrones or dominions
or rulers or authorities—
all things have been created through Him and for Him. 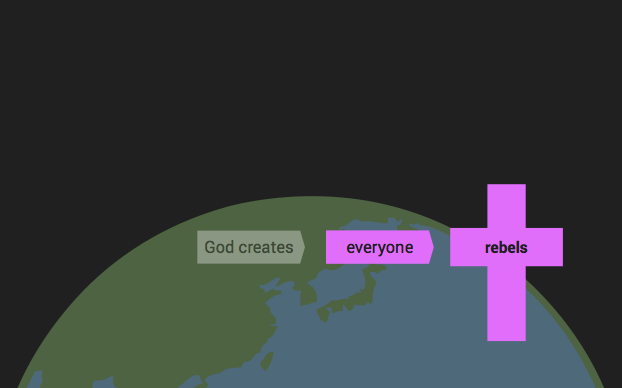 Sadly, everyone deliberately puts themselves first at the expense of others. This unloving attitude is a core aspect of sin. Unchecked, I think we become increasingly proud and narcissistic, while pushing away the Source of life, growth, vitality, joy and hope. Furthermore, the attitude and behaviour is a rebellion against God and His desire for the way things should be (wholeheartedly enjoying and praising Him—together, forever!). The climax of this rebellion was executing Jesus on a Roman instrument of torture, a wooden cross.

For everyone has sinned; we all fall short of God’s glorious standard.

If we say, “We have no sin,” we are deceiving ourselves, and the truth is not in us. 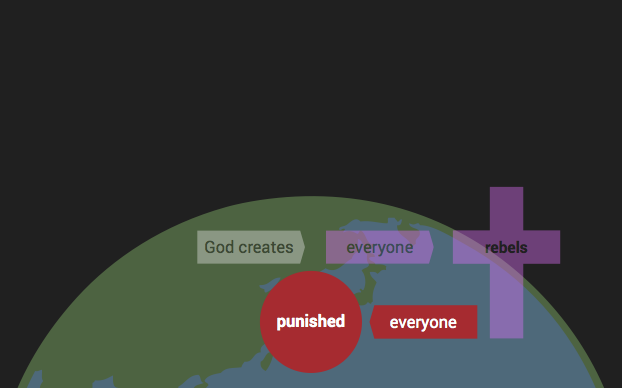 I think sin/rebellion becomes self (and other) destructive—spiritually, mentally and physically. Our physical death seems to be a reflection (a consequence, a form of punishment1 ) of this spiritual deadness/broken relationship.

When Adam sinned, sin entered the world. Adam’s sin brought death, so death spread to everyone, for everyone sinned. 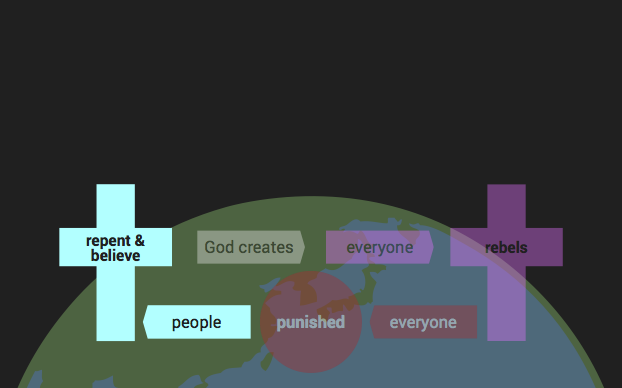 Jesus’ death on the cross thankfully changes things2, including demonstrating God’s forgiveness of our rebellion and drawing people to repent and believe in Him.

We know what real love is because Jesus gave up his life for us. So we also ought to give up our lives for our brothers and sisters.

Or do you despise the riches of His kindness, restraint, and patience, not recognizing that God’s kindness is intended to lead you to repentance? 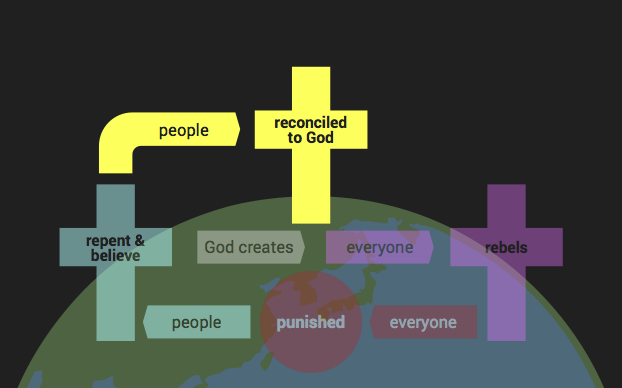 This means people are reconciled to God3.

For if, while we were enemies, we were reconciled to God through the death of His Son, then how much more, having been reconciled, will we be saved by His life! 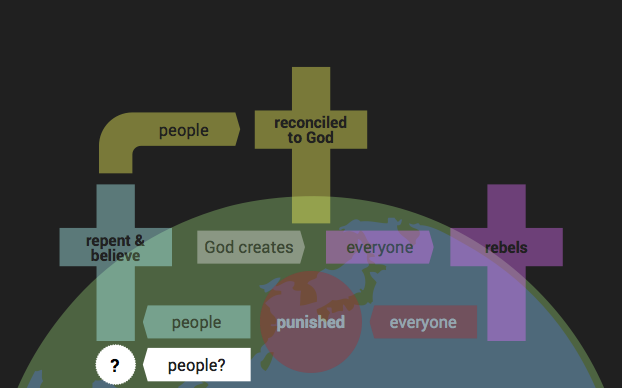 Although it would be nice to unpack each step a lot more, so far hopefully most Christians would be more or less in agreement. However, a major disagreement arises about the fate of people who don’t repent and believe in this life. Those people, according to many Christians, aren’t saved at this point, nor can they be saved at any later time.

Next week, in part two of this mini-series, I’ll try to make a case for why I think there is actually an amazing symmetry in Bible’s story, that the “people” in the last two steps of this flowchart are actually the “everyone” in the first three steps!

1. However, our current physical limitations, particularly death, should shatter our delusion that we are God and act as a limitation on the amount of evil (and self destruction) we can commit. In that sense, both are merciful and mean that the road to restoration is shorter.
2. Many books have been written on what happened on the cross and how we should understand the Atonement but Atonement Metaphors and Animated Explanation of Sacrifice and Atonement are helpful starting points.
3. We are also reconciled to each other – see Top 7 Bible Verses About Reconciliation.