Below is the second post in a mini-series unpacking my talk above.

Before I get to how Jesus’ journey through Hades encourages, inspires hope, and guides us when we suffer, I’ll share a few more possible parallels to the account in 1 Peter. First, Jesus pointed back to Jonah:

From the belly of the underworld [literally Hades in the Greek] I cried out for help… You had cast me into the depths in the heart of the seas, and the flood surrounds me… I have sunk down to the underworld; its bars held me with no end in sight.
But you brought me out of the pit.

Here we have a descent to Hades intertwined with the image of a flood, similar to 1 Peter. There’s also the parallel of the “bars” and being imprisoned, and that both Jonah and Jesus were in Hades for 3 days before being raised (Von Balthasar and Parry suggest Lamentations is another OT parallel 1).

But there’s more, while Jesus was going through Hades he preached the good news so that the dead prisoners could be saved (v6b “live with God”): 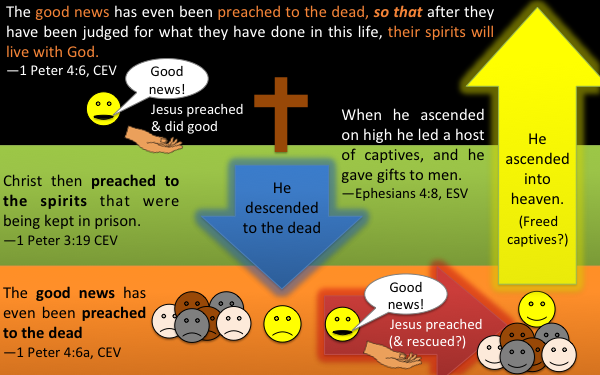 “When I am lifted up from the earth, I will draw everyone to me.”

And maybe these two verses are also alluding to the idea:

And they [the kings of the earth] shall be gathered together, as prisoners are gathered in the pit, and shall be shut up in the prison, and after many days shall they be visited [episkopḗ: “oversight that naturally goes on to provide the care and attention appropriate to the “personal visitation.””].
Isaiah 24:22, KJV

As for you also, because of the blood of my covenant with you, I will set your prisoners free from the waterless pit.
Zechariah 9:11, ESV

First, most people see death as a very significant problem that humans face. Therefore, believing God has defeated death should inspire hope. I think this was particularly the case for Peter’s audience in their non-Christian society. Think about it, whenever someone became a Christian, surely one of the questions would be:

What about most of my friends and relatives who don’t believe—especially all those who have died without even hearing the Good News?

Well, I think Peter’s answer is, “Jesus has told them the Good News so they could turn to Him for salvation.”

Second, “since Christ suffered physical pain, you must arm yourselves with the same attitude he had, and be ready to suffer, too.” (v1) Jesus proclaimed the Good News so we proclaim the Good News. Jesus did good so we try to do good. Some people will think we’re strange and will slander us—or worse. Depending on how severely they do that, it can certainly feel like hell, especially if it involves being betrayed by someone you love. 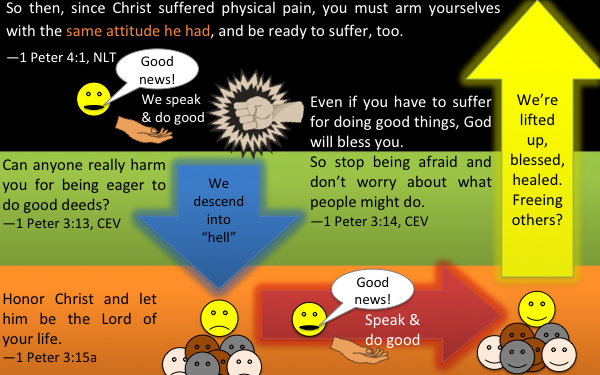 How do we respond to the suffering? We, “Honor Christ and let him be the Lord of our life.” (v15a) That involves continuing to do what Jesus did: Even in the depths of hell, He proclaimed the Good News so we should try to proclaim the Good News wherever we are. Jesus did good even when He physically suffered for it, so we try to continue to do good—particularly to those who are trapped in the hellish existence with us.

I think it’s worth noting that Jesus didn’t just pretend He wasn’t suffering, He acknowledged it and chose to persevere through it (the night before He was betrayed comes to mind). Likewise, we should acknowledge the suffering and try to imitate Jesus’ brave attitude. And God may even use this to rescue and draw others to Him. Regardless, we are guaranteed to be lifted up again—if not in this life, in the next.

So, “can anyone really harm you for being eager to do good deeds?” (v13) The answer is no, they can’t permanently harm you. “Even if you have to suffer for doing good things, God will bless you.” (v14a) He promises to heal everything in the long run. “So stop being afraid and don’t worry about what people might do.” (v14b) No matter what hell someone drags you into, Jesus will rescue you from it in due course.

1. “[M]y work on Lamentations started me thinking more about “the descent into hell.” I argued that Lamentations was Israel’s Holy Saturday literature, located midway between the death and resurrection of Jerusalem. It was Israel’s theological equivalent of Christ in the tomb. Thus I was led to connect Lamentations to the issue of hell and universalism and, via Von Balthasar, to the descent to the dead (Parry, Lamentations, 197–201).” Robin Parry, The Evangelical Universalist, 219
2. A common objection is that some people will only confess under duress, however, there are lots of reasons for thinking that’s not the case: